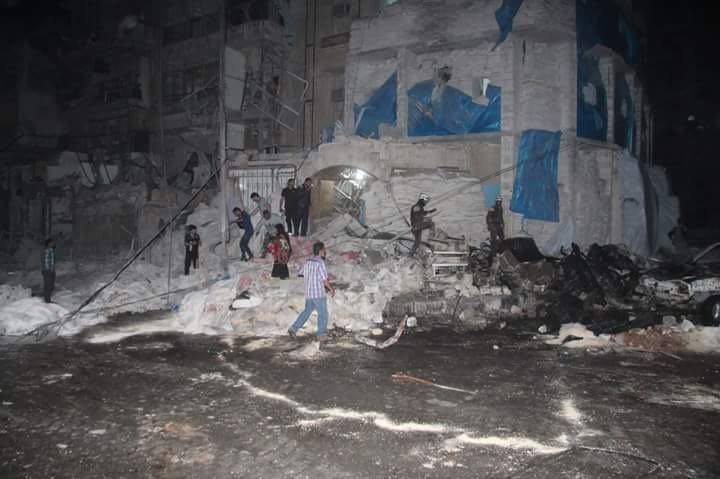 PRESS RELEASE: Systematic attacks on hospitals are war crimes that must be stopped NOW

Geneva, 28 April 2016, We (SEMA, SAMS, UOSSM, SHAM and PAC) strongly condemn the attacks on medical facilities and health workers in Syria. We call on the UN and all involved parties to put an end to these war crimes and to immediately protect civilians.
Attacks against hospitals and health workers continues to be the biggest challenge to the our ability to deliver humanitarian assistance. Hundreds of health workers gathered in Geneva on December 11, 2015, to attend the “Protect hospitals and medical workers” conference organized by USSOM. Unfortunately, not all those who attended are alive today. Dr Hasan Al Araaj, the director of Hama health district, was killed on April 13 by a missile that hit his car. The airstrike occurred at the beginning of the 3rd round of intra-Syrian peace talks in Geneva.

On April 27, another attack targeted the Al-Qudes hospital. Over 27 people were killed, and many others injured in the airstrike, among the dead was a doctor, a nurse, a dentist and many of the hospital’s patients. Dr Wassim Mouaaz was killed in the attack. He was the last pediatrician in the city of Aleppo. Dr. Mouaaz and his colleagues provided services to over 40,000 children in Aleppo.

Dr Chamaa, Secretary General of UOSSM who is from Aleppo said: “such attacks completely undermine ongoing efforts to achieve peace in intra-Syria peace talks, It is beyond belief and what a person can imagine. These attacks are war crimes and a humiliation to every doctor and every human right”.

Targeting health and aid workers as well as vital facilities, like hospitals,is unacceptable. Allowing these attacks to happen unabated and without consequence hinders aid efforts in Syria and humanitarian work in communities across the world because it normalizes mass atrocities, crimes against humanity and war crimes.

These systematic attacks must be stopped NOW.

We stress that we are against the violence and violations to humanitarian law by all parties and we condemn and call for an end to the shelling of civilians. We demand that the international community take immediate action to protect all civilians in Syria irrespective of their political, religious or ethnic background.